A Gravity Water Filter is machinery that allows you to filter polluted or contaminated water with the help of gravity. It sounds too broad.

The Gravity Water Filter is convenient, and it does not require plumbing or electricity to function.

Distillation, on the other hand, is the process of boiling water, capturing the condensation, and allowing it to condense back into water. After the water is distilled, impurities will be separated. Distillation is different from the process many municipalities recommend for purifying your water. Simply boiling the water will kill bacteria and microbes in it but it will not remove chemicals and other impurities like heavy metals. 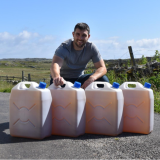